For a long time I've had super vivid, bizarre and sometimes really creepy dreams. I never call the creepy ones nightmares because I feel like in a nightmare you know something is scary when you're in it, but for me it always feels normal until I wake up and think about it. I guess I can call them nightmares to seperate them from the "normal" dreams... they're also really cool!

I usually share them with my friends when I wake up, I'll copy+paste some of them. Excuse any weird wording or run on sentences, I'm editing them very little to preserve as much of the original message as I can.

DREAMS OF THE ROTTING MIND:

There was a new Adult Swim special called "Dreams of the Rotting Mind". It was live action but the characters were cartoons and the sets were really empty looking.
The acting was bad but I liked the show, it was on Adult Swim's youtube channel and I heard a lot of rumors saying there was merch but the youtube description just said "enjoy" with no links or anything.
The plot was something like these characters were trapped in a weird time loop and couldn't escape until they defeated the dream witch, and when they did the background turned purple and started melting and the ground cracked open and there was a cocoon inside.

A friend of mine posted this drawing (I tried to copy it as best as I could) and was like "hey what do we think of this mascot for the group chat" and I thought "Wow. I think it's looking at me." I can't really remember but its name might've been Reese's Cup. I'm playing a video game where I'm laying in a bed in a room with dusty rose walls. Old timey swing music is coming from somewhere; it's quiet and sounds like it's playing through a gramophone because the quality is really crackley. On my right is a door and next to it is a vanity with a chair but I get the feeling that I don't want to look into the vanity mirror for too long.

On the wall in front of me is a small TV that's turned on with an old preacher who's saying something but it sounds like he's speaking underwater. I subconsciously know that he's keeping me from leaving the bed.

I "wake up" in the same bedroom, but this time the preacher's looking directly at me.

I've had the dream before, the game I'm playing in it has you go through a series of rooms and that's just one of them. The other rooms I can remember are a big grey one where the walls are full of TVs with surveillance footage, a hallway with something coming out from under the doors (it looks like silly putty but not. Like in the dream I know it's alive) and something that looks like a manager's office with green walls but there's meat hanging from a hook in the center of the room like in a slaughterhouse.

I don't actually remember any of this one other than the fact that I was playing Stardew Valley in it and saw this screen. This one is probably my absolute favorite... it began normally, I was at one of those banquet halls for a birthday party, there was music and people were playing darts along with other games. But someone threw the dart at the back of another person's head and when it hit them all the noise stopped, the other people disappeared and the rest of the dream was silent.

The person's head exploded but their body was still standing. The walls of the hall eroded and the sky was a bright red, the air was thick and smelled like blood. Around the scene fat, intestine-like worms and maggots squirmed around and seemed to be coming from an elephant's corpse along with slimy, undulating stomach lining. It actually was more like just a pile of meat clinging to bone which my dream-brain registered as an elephant.

I drew a pic a while ago of my nightmare fairy Runa in front of the scene. 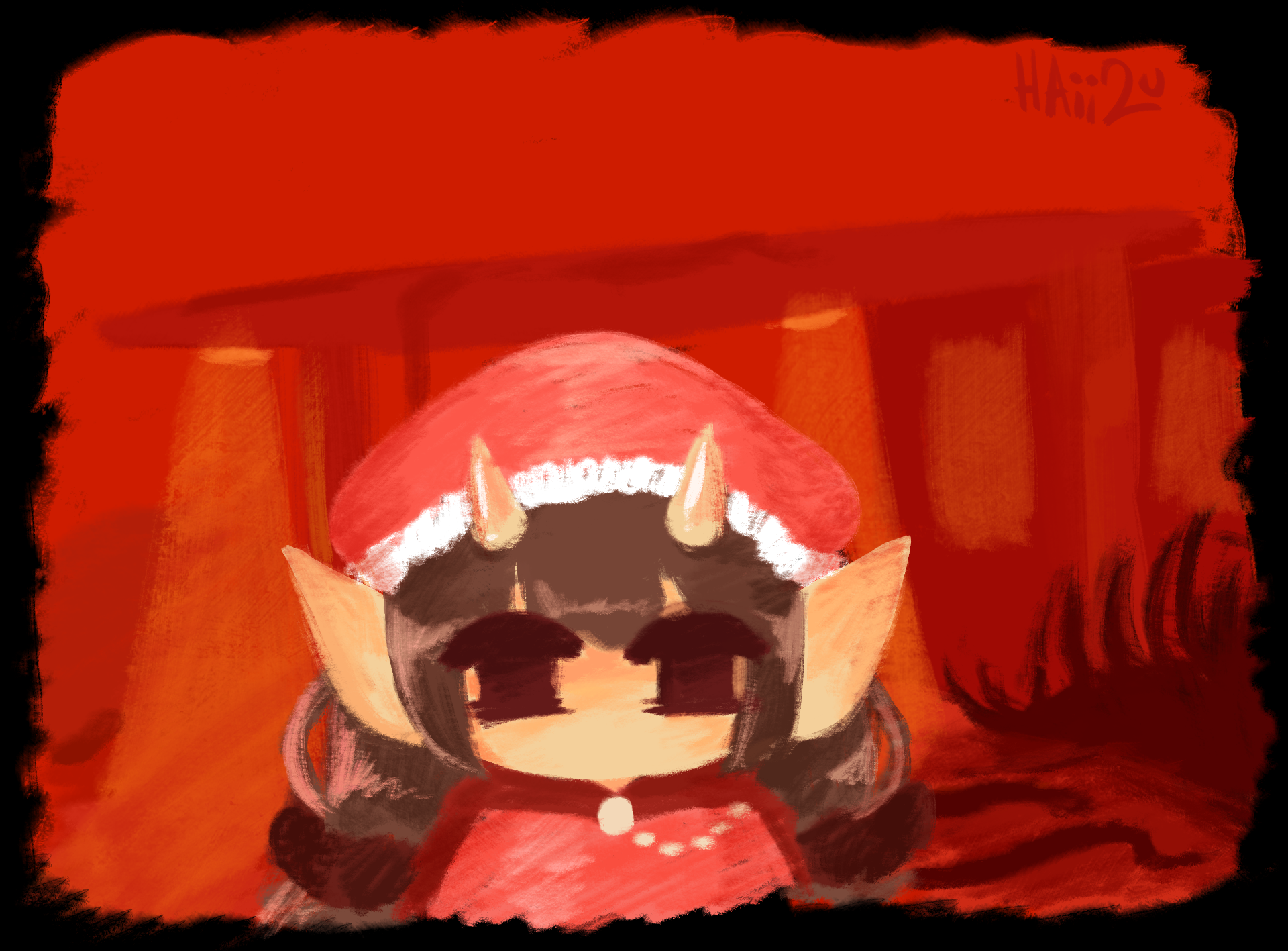 That's about it for now! I thought about making an online dream journal which I might still do because the non-nightmare ones can be really funny but I'd have to think about how I'd wanna do that (maybe a seperate page with the same blog layout..?)